Whitewater State Park might be in my top three favorite parks in Minnesota. A huge reason is that the conditions aren’t ideal for pesky mosquitoes due to cold-spring fed water that is constantly moving.

But it’s the bluffs that capture my heart.

Once more, I woke up at 4:30 a.m. and drove two hours to catch a state park sunrise. This morning treated me more colorfully than the visit to St. Croix State Park.

I had hoped that the color would expand into the clouds but it mostly stayed behind the ridge. And yet, it was a gorgeous scene.

After sunrise, I quickly transferred to the eastern Chimney Rock where I watched the sun burn the shadows away.

The five bluffs at Whitewater State Park are close enough to one another to climb all of them in one day. At Chimney Rock, you can view the widest part of the river offering a swimming hole for campers. I love the reflections here.

From here, I went south along the Chimney Rock Trail which bordered farmland and you can see where dried, small gullys zigzag down into the banks of Whitewater River. The sun burst through the trees and illuminated the yellow leaves all over.

Then I discovered Inspiration Point and wonder if it’s my favorite part of the park. It reminded me of the North Shore without Lake Superior.

But of course, it is not the North Shore. It has its own beauty and another reason to love Minnesota and our state parks. 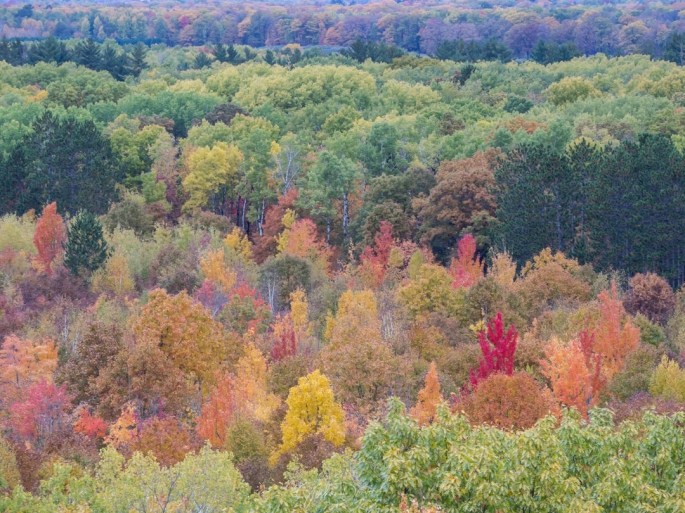 While I made plans to capture autumn colors this year, I made note of fire towers in state parks and St Croix State Park made the list. It’s about two hours from the Twin Cities, including a slow drive on a dirt road. At the time, the roads were bursting with every fall color.

I arrived at the fire tower at 6:45 a.m. after leaving the house two hours earlier.

After climbing a more rickety tower in Grand Portage, Minnesota, this one’s stability helped with my fear of heights. I ended up staying on the top platform for an hour watching and waiting for color. I’ll tell you three tips that really helped me become absolutely (well, mostly) comfortable with fire towers:

While the clouds didn’t allow much of a sunrise, the trees beneath me were nicely represented in the low, even light.

After climbing down, I started driving back and in the immediate 200 feet or so, stopped my car, got out, and took pictures five times of the wrapping color around the road. Just stunning. I recommend St. Croix State Park for the scenic drives on these dirt roads if nothing else. I even got to see my first wild porcupine cross the road.

When I entered the park at 6:00am, I couldn’t see any colors but upon exiting, it was red everywhere and colors layered and filled in everywhere. Below is an example of the color burst.

I was so enamored with color, I returned with my wife less than twenty-fours later. Shockingly, in that brief time, much color was lost and now lay on the roads and paths. I couldn’t believe how it changed so dramatically after one night. There remained enough color to enjoy the park, but it was a different experience for me and a bit of a letdown since I brought Sarah to enjoy it. 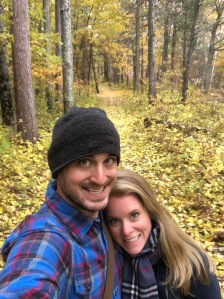 But we did enjoy all of it.